The Power of Creativity and how it can support us to heal the Childlessness wound!

OMG – I can’t believe I actually wrote the above and wondering whether you are still here reading?

I make up that I am being shot, or at the stake, or stoned by some of you, hahahaha.

So let me explain – Is childlessness a wound?

Being childless or childfree is not the wounding.

For years I walked around in the dark and on my own not realising that I was grieving and in silent pain from the loss that I had suffered.

Feeling that I needed to just get over it, to move on and to live my life.  Deep down in my body I was just a shell of my former self.  I had lost who I was and who I was going to be, which, by the way, I had no idea who that was.

I was just a shadow walking around wounded, having placed a ‘mask’ on my face every time I walked out of the house.  Ready to defend and fight for myself – protect myself and the pain within from being seen.

This showed up in the world as working really hard, perfectionism, addiction, avoidance, not feeling good enough in anything that I was doing and fighting to keep my insides on the inside, while meantime thinking – a lot!!!!  It was exhausting and I used to come home and drop down on the sofa, turn on Netflix and veg out there for hours.

So how can creativity and the arts help?

For 20+ years I have been using the power of creativity to connect to the parts of me that had no voice. That inner child, which was hurt, angry, sad and grieving and needed to be seen, heard and understood.  This helped me in my early 40’s to integrate and grieve the past.

Over the last 10 years I have used the arts to support me in my decision making, connect and help me process my emotions around IVF and then the grief of not being able to be a parent to my own child.

These journals have been such safe places to go to and flow my emotions onto and then to see, empathise, love and care for.  At times there is nothing to say, but plenty to listen to.  Those wounded places are so incredibly wise and intuitive. 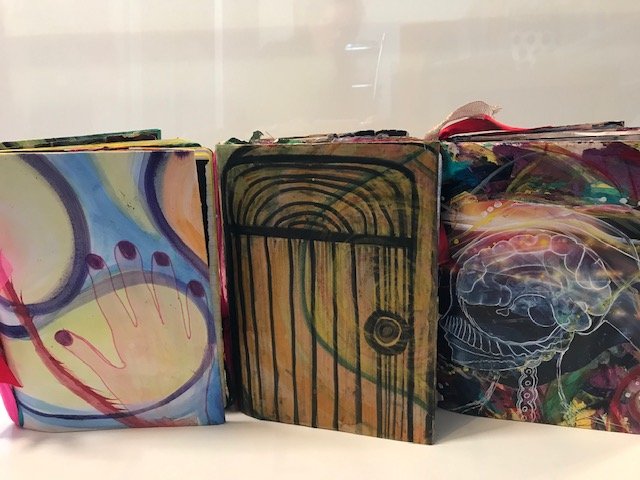 Brene Brown says, “The only unique contribution we will make in this world will be born of creativity.”  Though without this connection to our personal creativity how do we contribute?”  How can we create when we are 100% invested in hiding these parts away in shame and isolation?

In my experience, and others who have joined me on my workshops, when we connect to this intelligence, within the wounds, we become freer, more connected and in turn more ourselves.

The first step that needs to be taken is a want and a need to look within.  To let go of the fight for long enough to see what is behind our pain.

Trusting in the process is important and sometimes that takes a risk to try something new.

I teach a beautiful process of intuitive creativity – there is no right or wrong, good or bad.  We identify some of the things that stop us creating and in my experience. these also stop us being ourselves.

The ‘not good enough and I’m not enough!’

We go slowly and at your body’space.  Sometimes it’s quick and sometimes it’s slow.  It does not matter.  What matters is that you’re going at a pace that is right for you and in this place you are healing.  This is the magic.

See Alisha share her experience of going through the last 12-week program with me. Watch Here!